Assume we have two packages p1 and p2 and classes p1.M1 extended by p2.M12 as follows:

This gives a compilation error as method1, being package-protected within p1 is not visible in p2. method2 is visible without problems.

Here I’m getting a compilation error for both method2() (which is understandable) and method1(): 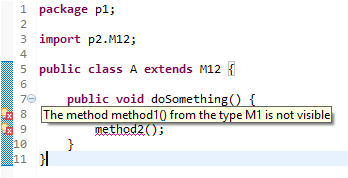 My question is: why is the method1 which is package-protected in the package p1 is not visible in the class A from the same package p1?

First, what is a member of a class? The Java Language Specification states

And what are they composed of? The JLS states

The members of a class type are all of the following:

Only members of a class that are declared protected or public are inherited by subclasses declared in a package other than the one in which the class is declared.

All of this is reworded in the chapter on Inheritance

A class C inherits from its direct superclass all concrete methods m (both static and instance) of the superclass for which all of the following are true:

The members of class M1 are method1 (and all the methods of Object). M12, being in a different package than its direct superclass, M1, does not inherit method1. The members of M12 are therefore only method2.

The direct superclass of B is M12 and is in the same package. It therefore inherits its member, method2. B knows nothing about method1. If you had compiled your code with javac, you would have received a cannot find symbol compilation error instead. (It seems Eclipse is trying to guess what you were trying to do.)

Similarly, the direct superclass of A is M12, but is in a different package. It does not inherit method2 for that reason. A doesn’t know anything about method1 or method2 because it didn’t inherit them. Both of those symbols cannot be found.