In my interface AuthorDao I have some basic crud methods and one extra method which is static for getting a new instance of MyAuthorDaoImpl1.

Also, in his opinion this static method will simplify refactoring if we will decide to change MyAuthorDaoImpl1 to MyAuthorDaoImpl2. Because the only change will be in getInstance() method.

This implementation is a circular dependency, which roughly looks like:

While it will likely work in Java, imagine what would happen if you no longer included the class MyAuthorDaoImpl when later you decided to implement ABetterAuthorDaoImpl. Now you have to change the interface. It is a minor change in this case, but imagine it on a larger scale.

Normally a factory method returns the interface type rather than the implementation type. Example:

This avoids the circular dependency, demonstrated by this diagram: 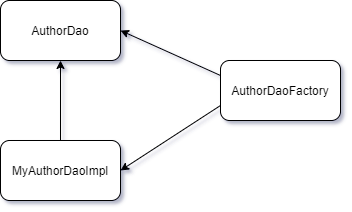 You’ll note that there is no circular path in the dependencies. This may not matter for this simple example, but what if your factory method created an instance of a class that was dynamically loaded based on a config? This is a common example of Inversion of Control (IoC) and is often used to do things like provide a common interface to different hardware. The implementation is hidden behind the interface.

You’ll notice that the Java Calendar class method getInstance returns the type Calendar. The underlying implementation may be locale-specific. If you look at the description of the method in the Java documentation it says:

What is the implementation then? You don’t know and don’t care, you only know it is of type Calendar.