It’s very complicated to explain so sorry if it’s not clear. Basically, I’m on a group project in javaFX, and every time I clone it, my PC doesn’t recognize either Java or JavaFX on THAT project exactly. All the others work fine. So I have to do a lot of manipulation each time for it to “work” (I explain below).

And today I have clone because of an error. Except that impossible to make it work again.

What I did on IntelliJ after cloning:

-I reloaded the MAVEN project

-I imported the java libraries

-I put the right folder in ROOT

-I created the configuration 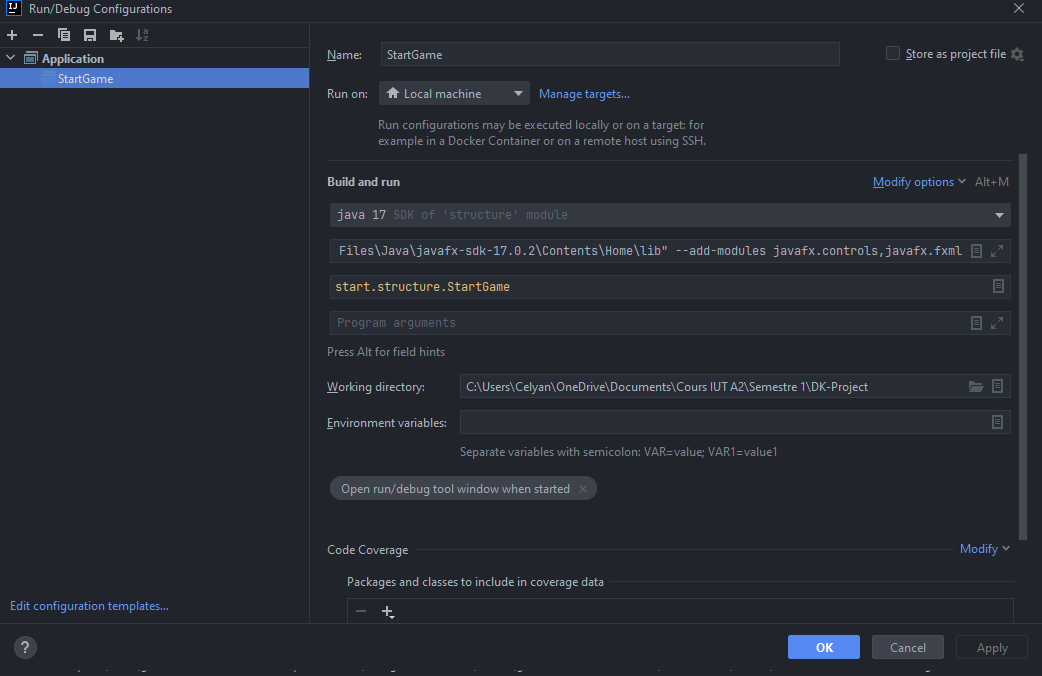 From there, Java and JavaFX are recognized. After that, I have other problems. In particular that of “The output path is not specified for module structure” and after that it redirects me to File -> Project Structure -> Project and compile output. Except that in my previous problems, I didn’t have to define a Compiler Output. Usually the steps above were enough. And the problem is that I have no idea what to put in this section. I searched all over the internet, but 90% of the time it’s an old version of IntelliJ and it was asking them for a path. There, I am asked for a file (impossible to choose a destination path, it is greyed out). And in CTRL C + V the path directly (for example an excluded “Out” folder like what I have read on the internet), I have this error at launch:

I want to re-specify that there is no error in the code, we have exactly the same with my team, and with them it works without worries.

If someone know how to resolve theses problems

This isn’t really fully answerable here in a general sense, because there are too many environmental and project-specific things that may occur.

Instead, I’ll provide a suggested approach for a new project:

That is really all you need to do to use JavaFX + Idea + GitHub.

A pre-existing project may require additional steps for configuration and use which may be project specific, so I can’t generally advise on that.

Some comments on the approach outlined in your question: