I’m not able to run Oracle SQL Developer on my mac(macOS Big Sur) It complains about the Java Version which is strange, because I have Java 11 installed, installed via HomeBrew, and idea what might be the issue? 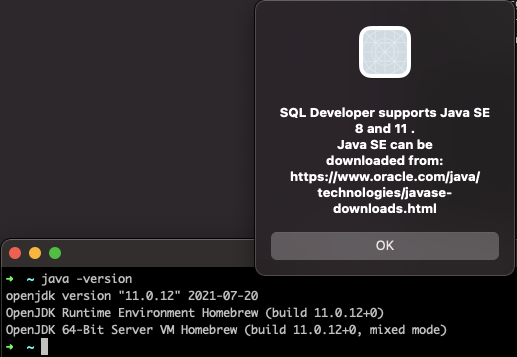 If the answer is anything older than 7, equal to 9 or 10, or just something other than a valid JDK, it won’t start.

8 or 11 are officially supported. I’ve played with 14, 16, and GraalVM 16. Stay away from the GraalVM for SQL Developer today – it’s got issues. The newer Java’s should be OK, although you’ll get a warning about running a version higher than officially supported (8,11).

If you’ve done all of this, and it STILL won’t load. cd to your $HOME. Then go into your .sqldeveloper directory, and look for a a directory of the same name as your SQLDev version.

In there is a product.conf, find this line, uncomment it, supply full path to the JDK, save it, then start SQLDev.