I was reading about data locality and want to use it to improve my game engine that I’m writing.

I ask this because I thought that using arrays would be a good way to make them contiguous, but I don’t know if an array will fix my problem!

An array of objects is really an array of references (pointers) to objects. A pointer is an address to another location in memory.

We speak of the array as holding objects, but that is not technically accurate. Because Java does not expose pointers themselves to us as programmers, we are generally unaware of their presence. When we access an element in the array, we are actually retrieving a pointer, but Java immediately follows that pointer to locate the object elsewhere in memory.

This automatic look-up, following the pointer to the object, makes the array of pointers feel like an array of objects. The Java programmer thinks of her array as holding her objects when in reality the objects are a hop-skip-and-a-jump away.

Arrays in Java are implemented as contiguous blocks of memory. For an array of objects, the pointers to those objects are being stored in contiguous memory. But when we access the elements, we are jumping to another location in memory to access the actual object that we want. 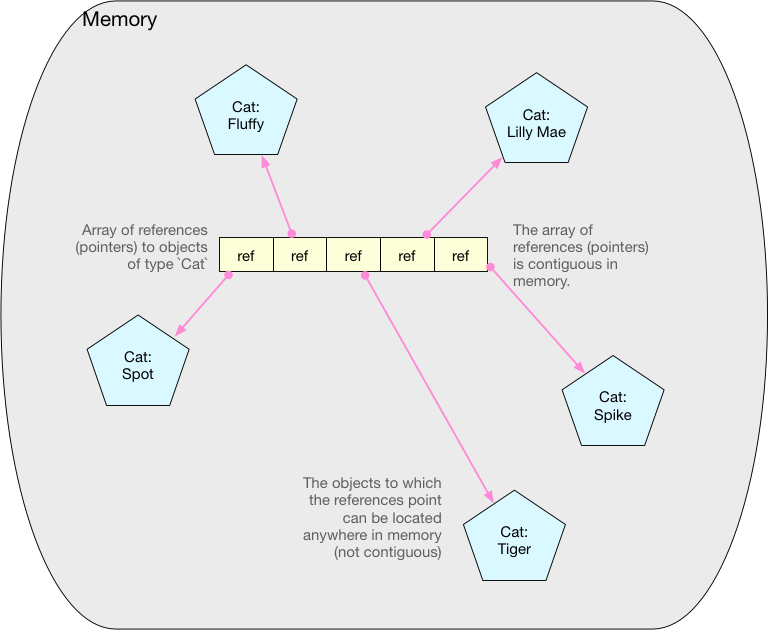 Adding elements may be “cheap” in that if memory happens to be available next door in memory, it can be allocated to the array to make room for more elements. In practice this is unlikely. Chances are a new array must be built elsewhere in memory, with all the pointers being copied over to the new array and then discarding the original array.

Such a new-array-and-copy-over is “expensive”. When feasible, we want to avoid this operation. If you know the likely maximum size of your array, specify that size when declaring the array. The entire block of contiguous memory is claimed immediately, with empty content in the array until you later assign a pointer to the elements.

Inserting into the middle of an array is also expensive. Either a new array is built and elements copied over, or all the elements after the insertion point must be moved down into their neighboring position.

In Java, the eight primitive types (byte, short, int, long, float, double, boolean, and char) are not objects/classes and are not Object-Oriented Programming. One advantage is that they are fast and take little memory, compared to objects.

An array of primitives hold the values within the array itself. So these values are stored next to one another, contiguous in memory. No references/pointers. No jumping around in memory. 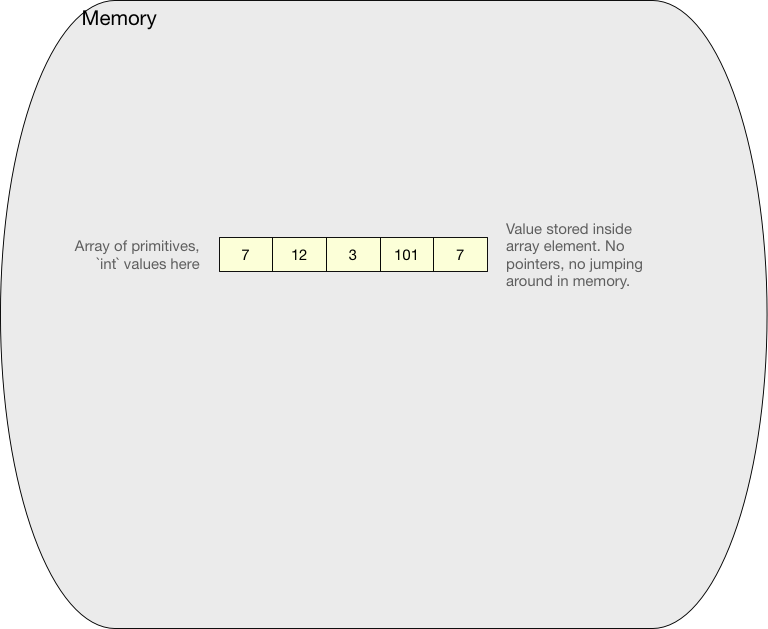 In business apps, it is generally best to use objects.

That means using the wrapper classes instead of primitives. For example, Integer instead of int. The auto-boxing facility in Java makes this easier by automatically converting between primitive values and their object wrapper.

And preferring objects means using a Collection instead of arrays, usually a List, specifically a ArrayList. Or for immutable use, a List implementation returned from the new List.of method.

In contrast to business apps, in extreme situations where speed and memory usage are paramount, such as your game engine, then make the most of arrays and primitives.

In the future, the distinction between objects and primitives may blur if the work done in Project Valhalla comes to fruition.