I have the following schema I am implementing for counting button taps for a user . For example if the the user clicks on apple button I would like to store the type as primary key which would be a unique entry followed by the count for the number of times the user taps on apple button and for each of those i would also save the time associated with those clicks . So I am trying to learn room database and wanted to understand how I could update unique fruit types rows with with the new associated count and timestamp . Would I have to query the table getByType(type) to get the existing data entry and then update it everytime with the new count and timestamp values everytime or is there a better way of doing this using room api’s

I believe the following could do what you want:-

For example the following :-

i.e. when inserted count and time were 0 after the update count has been incremented and the current time has been set accordingly. So no need to get the data and then apply (as long as you are aware of the type which you should if it equates to the button).

I would still need to insert once before updating and incrmenting ! Is there a shorter version to insertorupdate at the same time.

Yes, perhaps. However, if you have a button then I’d suggest inserting when you know that you should have the button.

If the App is targeted at android versions that have SQLite version 3.24.0 (Android API 30+ version 11+) then you could use an UPSERT (INSERT with an ON CONFLICT() DO UPDATE clause).

The alternative would be to utilise INSERT OR REPLACE which would simply be a matter of using:-

BUT you would have to retrieve the count.

HOWEVER a more complex solution could be to get the count + 1 for the type with a subquery. This is complicated as when first inserting there is no count. This can be resolved using the SQLite coalesce function. This would require @Query as @Insert expects an Entity object. So a solution that Inserts or replaces (updates but actually deletes and inserts to perform the update) could be :-

Example (of both INSERT OR REPLACE options) :-

Following on from the above code the following was added in addition to the changes/additions of the Dao’s as above (NOT the UPSERT) :-

The database then looks like (all of Android Studio Show) :- 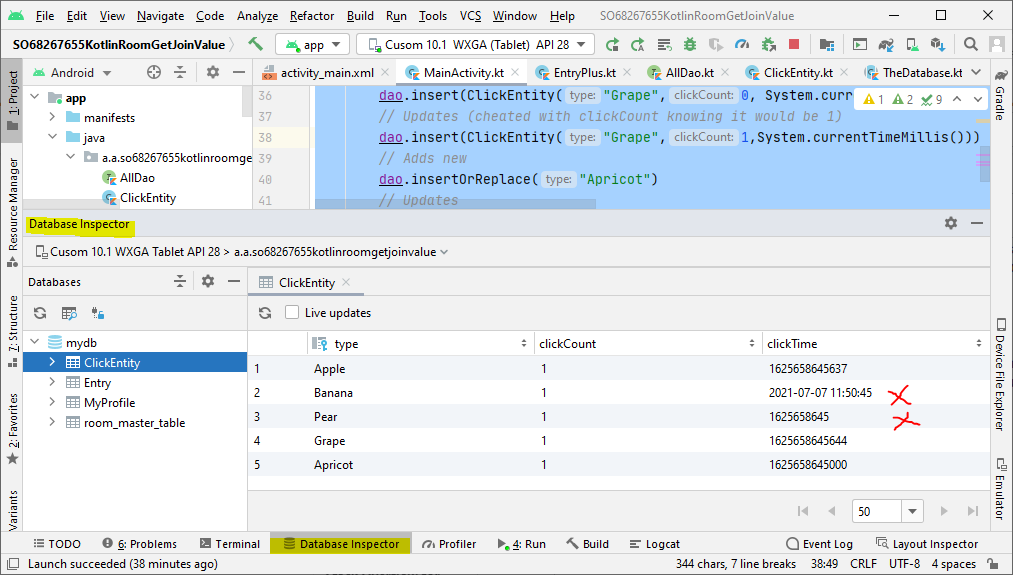